Those up to date with the eternal FIFA corruption controversies, will recognise the name of Julio Humberto Grondona. the administrator was the head of the Argentine Football Association (AFA) for 35 years until his death in 2014. Posthumously it was revealed that Grondona was heavily implicated in the related investigations of the disputed awarding of the 2018 and 2022 World Cups; proving the suspicions of many an Argentine football fan to be true, regarding his ethics.

Before all that though, Grondona established Arsenal FC in the barrio of Sarandí, along with his brother, back in the year 1957. The club’s colours were curiously selected based on those of the neighbouring ‘Big 5’ clubs of Independiente and Racing of Avellaneda.

For a relatively small club, Arsenal boast the enviable record of only ever having been relegated once – cynics may suggest this has something to do with their powerful founder. The club’s peak was undoubtedly 2012 when they won the national  Clausura and the Copa Sudamericana.

The club have punched above their weight for 13 years in the Primera and were enjoying another fine season, lying in third place in Group A heading into this game with Rosario Central. They still had hope of winning the group, however this was more mathematical than realistic. 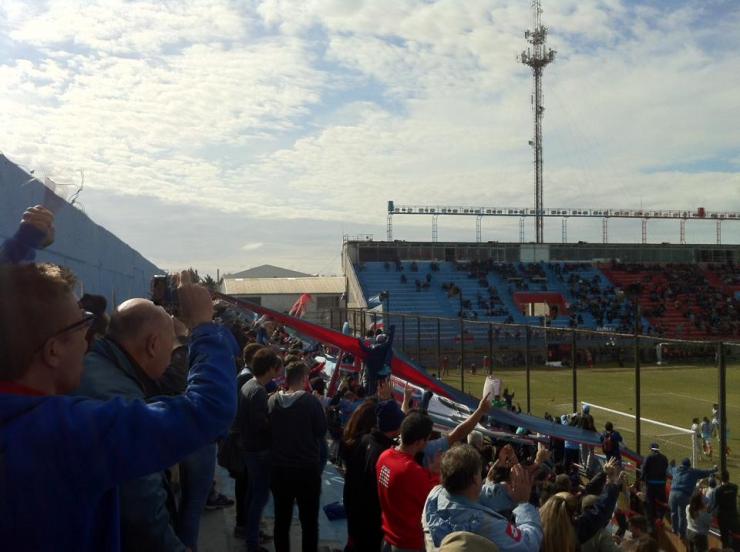 The stadium sits under the train track viaduct, emblematic of the town, and which also lends a nickname to the club – Los del Viaducto. Various plazoletas located nearby where the fans met for their pregame drinks and choris.

It must be said that the popular section behind the goals offers the worst view of the pitch I’ve experienced in Buenos Aires. the pitchside fences are a necessary evil here, but the top pole of said fence was right in your eyeline of the middle of the playing field. to make matters worse, the local Banda decided to hang various banners of the fence, resulting in an impaired view for everyone but them.

The game itself was tame enough, Arsenal showed more endeavour and then were happy to protect their 1-0 lead, whereas Central were weakened and focusing on their Copa Libertadores quarter final. The fanbase is very small but made a lot of noise to compensate.